The Parker Monaco Flybridge has arrived

Boating enthusiasts were eagerly awaiting the release of the Flybridge edition of Parker Poland’s Monaco model. Indeed, BCI Marine can unhesitatingly vouch for this model’s groundbreaking appeal, with unmatched comfort and style signed by the famous Tony Castro.

The Parker Monaco Flybridge positions itself within the new line of luxurious sports crafts launched by the Polish manufacturer in 2018. For this new model, Parker Poland focused once again on concept and design. The company paired up with industry leaders to achieve a perfectly balanced creation.

Feedback from customers and distributors about the line’s first model were leveraged to bring the Flybridge edition to the next level, with important details that make a tremendous difference. For instance, an opening mechanism was added to a large starboard window allowing passengers to get the most of the sea air.

What makes Monaco boats so exceptional

The Flybridge is a 37-ft long outboard pleasure craft which—like its predecessor—is both luminous and spacious. Its cockpit features a stationary solar roof allowing maximum sunlight to reach the lower deck. This luxury yacht holds two powerful Yamaha outboard motors that offer high efficiency without weighing down the boat. The interior of this craft is spacious and meticulously designed. 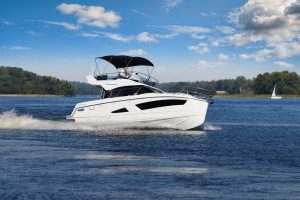 Parker boats always offer wonderful options. In fact, BCI Marine heard talk that the manufacturer is thinking of offering the Seakeeper gyroscopic stabilizer and/or retractable side panels to open up the cockpit. Stay tuned to learn more.

If you don’t fall madly in love with this model, don’t worry—Parker Poland usually comes out with a new model every year to keep up with the ever-evolving needs of its customers. The president of BCI Marine, Patrick Hardy, actually predicts that Parker Poland will launch a 14-meter outboard craft before 2022!

Parker boats are known for their superior quality, strength and sea-keeping performance. BCI Marine is a proud partner of the company’s success in Canada.

Parker Poland is a subsidiary of AH Parker & Sons Ltd (GB), active in Poland since the early 1970s. Parker has become a well-established manufacturer and supplier of rigid inflatable boats—both open and cabin versions. Over the years, the company’s know-how has become well recognized, enabling them to make their way onto the market of sports, pleasure and fishing boats. Today, they offer a dozen different models, all of which are available at BCI Marine.

locate your closest dealer, by brand or by postal code